As awareness grows regarding what we put in our soils and crops, irrigation solutions that avoid toxic glues and solvents have emerged to satisfy avid DIY’er. When you want to irrigate without using glue and solvents, Blu-Lock and PVC-Lock is the answer. These products use a method known as “push-fit” to join. Push-fit is not only friendlier for the environment but it is significantly faster and easier to install than traditional methods. Both products can be incorporated into the same project, with PVC-Lock being placed before the valves and Blu-Lock coming after the valves. They can also be used independently, giving you great flexibility in designing your system.

PVC-Lock push-fit fittings can be used in any system that uses PVC. The push-fit technology means you do not have to use primer, solvents or glue to join your PVC sections together. This means you, your soil and your irrigation area will be exposed to fewer toxins and there will be less time spent waiting for primer to work and glue to dry. The “teeth” in  PVC-Lock fittings latch on to your pipe and create a leak-free seal. PVC-Lock is rated for constant pressure and can be utilized both before and after your valves. As you can see from the picture below, PVC-Lock fittings work like standard PVC fittings, but without the need for glues. 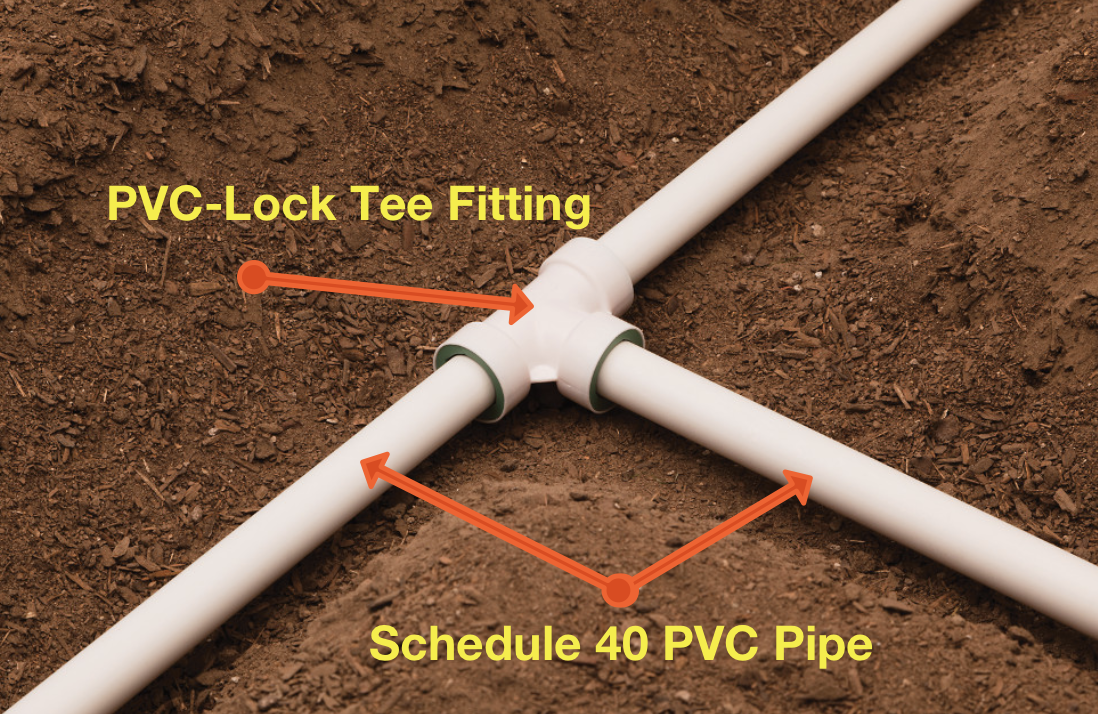 As noted previously, PVC-Lock can be used before the valves as well. In fact, PVC-Lock can be used to build the manifold that will connect to your valves. This can be particularly advantageous, as not only does it avoid using potentially toxic substances, but the fittings can be rotated 360° after installation for easy alignment. This is a feat impossible for traditional methods, as once the glue is dried there is no rotating the pipe or fittings. 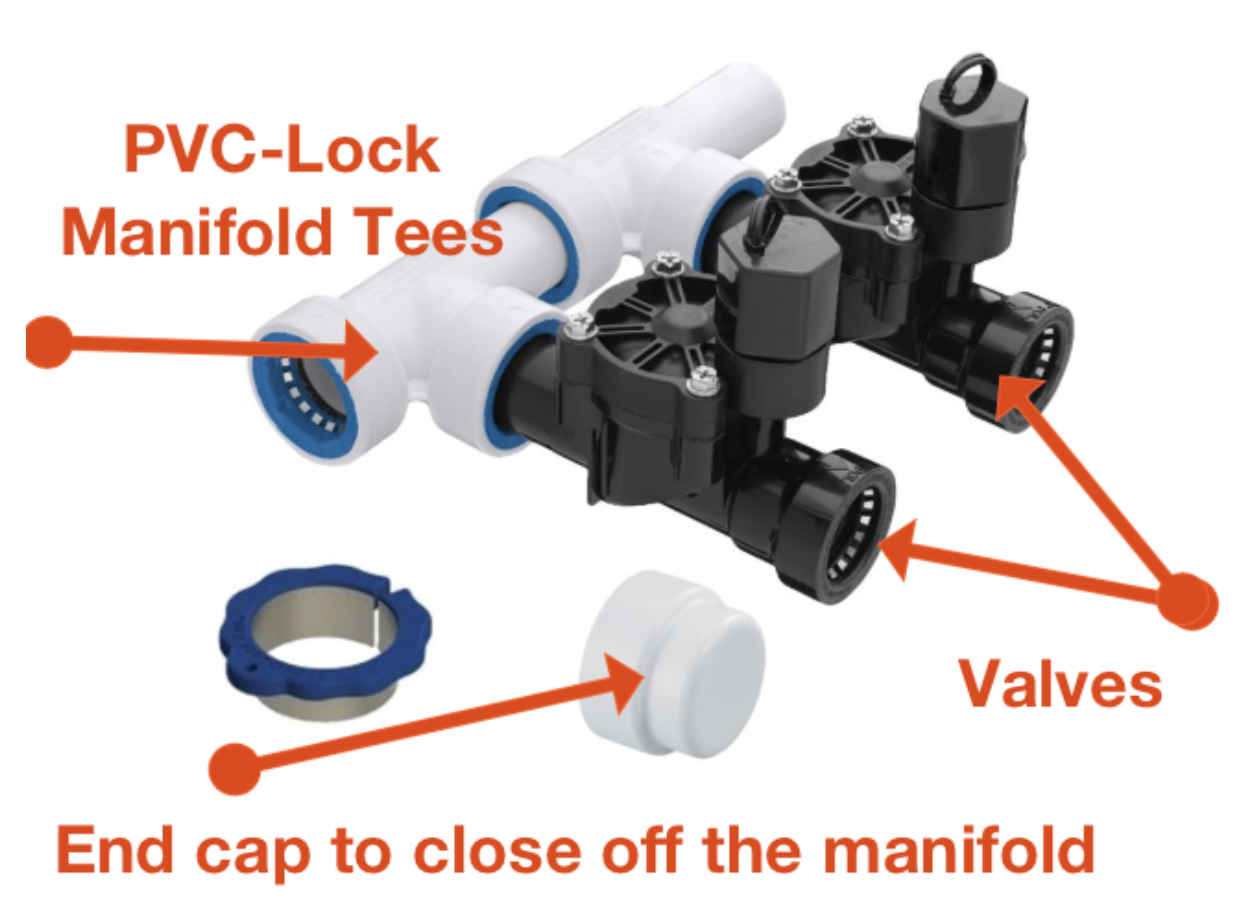 As illustrated above, creating a PVC-Lock manifold is as easy as pushing the parts together. The “teeth” inside the stainless steel retainer ring and the inner O-ring create a watertight seal without the need for toxic materials. PVC-Lock can even be installed under wet conditions, something which can bring immeasurable value when quick repairs are needed in less than ideal conditions. When you need a project done accurately and fast, you can’t go wrong with PVC-Lock. A PVC-Lock manifold like the one in the picture above can be assembled in less than one minute.

A list of available PVC-Lock fittings can be found here: PVC-Lock Fittings.

Whereas PVC-Lock is designed to be coupled with PVC, Blu-Lock uses its own flexible tubing in conjunction with its push-fit fittings. With the wide variety of Blu-Lock fittings, pipe and tubing available you can complete your irrigation setup without the need for PVC pipe. 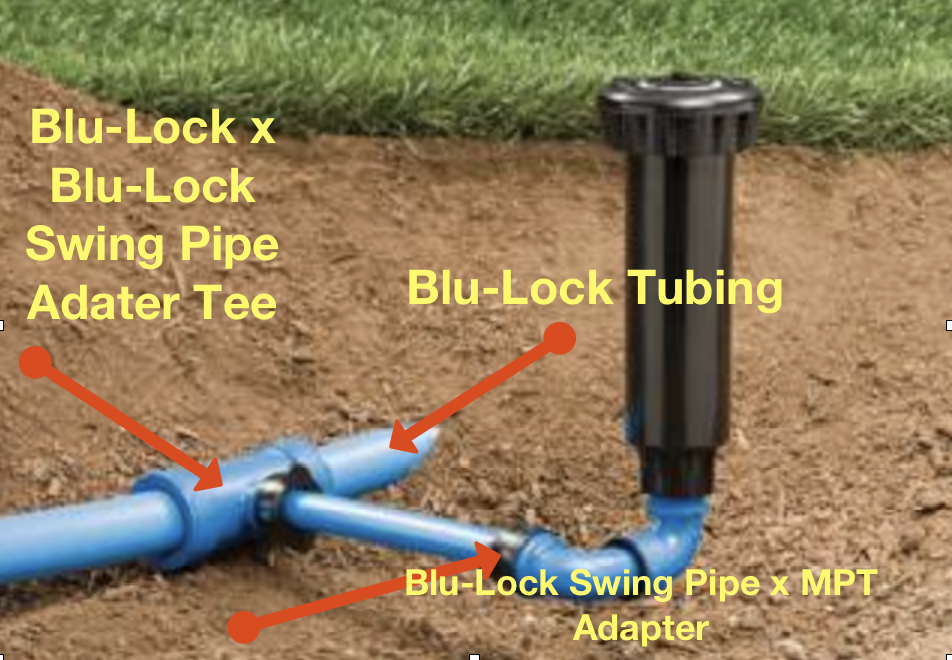 Blu-Lock is faster and easier to install and is crafted from environmentally-friendly, recyclable HDPE pipe that can be an alternative to cumbersome PVC setups. Blu-Lock is up to 70% faster to install than traditional PVC setups. Combined with PVC-Lock, an entire system could be completed at a rate impossible with PVC alone. When you couple that with the fact that Blu-Lock has a lower environmental impact, many people, both homeowners and contractors, have made the switch. 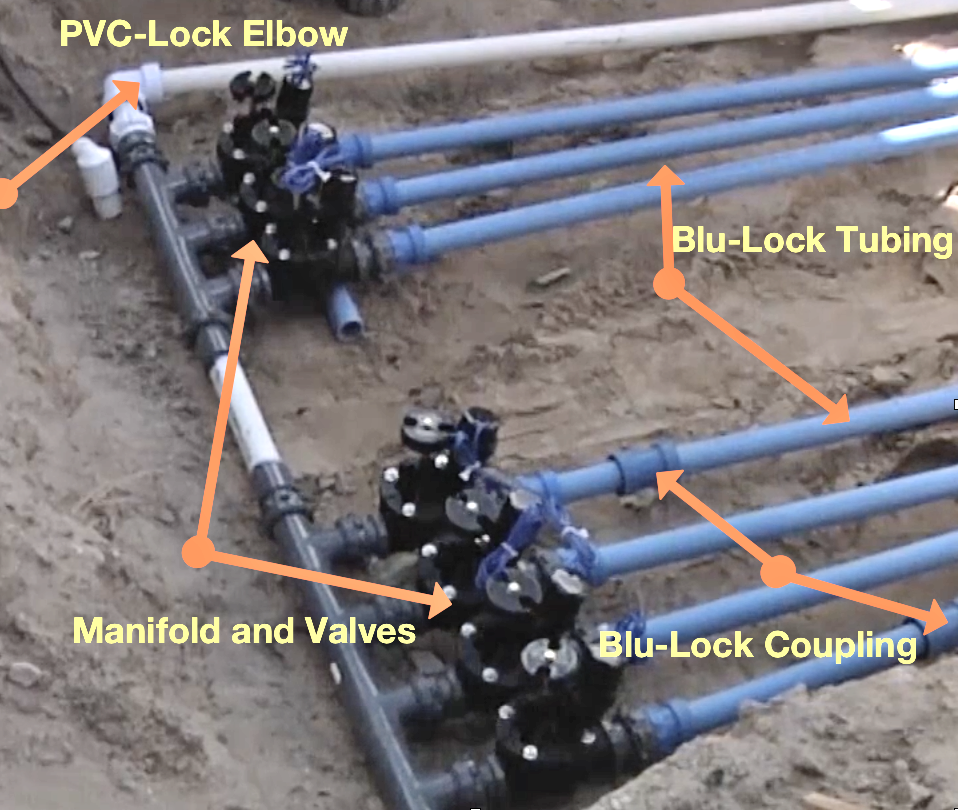 As seen above, this is a setup that would require a lot of time, priming, gluing and assembling if it were built using a traditional PVC configuration. With the use of Blu-Lock and PVC-Lock push-fittings, a job of this scope can be completed significantly faster than other methods.

Conclusion: For the average consumer and DIY’er, PVC-Lock and Blu-Lock systems will be faster and easier to assemble than using traditional methods.  Not only will time be saved, but exposure to solvents and glues will be limited.  This is good not only for the health of your soil and plants, but your personal and family’s health as well.

Thank you for reading. If you have any questions, comments or feedback, please Contact Us.  We read and reply to every message we receive and would love to assist with your questions and learn from your feedback.