If you are even a little bit familiar with the irrigation industry, you probably already know there are no set industry standards as far as flexible poly tubing and fitting sizes are concerned. Although PVC is standardized, in its industry, it is still confusing when sizing or matching components with the pipe. It seems nothing is really the size it is named. In the manufacturing world, this is called nominal sizing. This guide was created to explain or clarify the correct sizing and matching of PVC pipe and fittings and the terminology used in this industry.

A Little History About PVC

First discovered way back in 1872, it wasn’t until the early 20th century that PVC (polyvinyl chloride) was further developed into a more usable plasticized polymer. The rigid, often brittle polymer was combined with various additives to make it more flexible and easier to process. Very soon, it achieved widespread commercial use.

Today, PVC has two basic forms, rigid and flexible. Probably the most common use you can think of is PVC pipe, although it is also used in doors and windows, bottles, packaging, flooring and even in those little cards we use everyday instead of paper currency, just to name a few. Polyvinyl chloride (PVC) is the third most widely used plastic polymer in the world, with over half of that being used in making pipe and fittings for pipe that are used in our water and drainage systems.

Some of the specifics that make rigid PVC so popular are availability, cost, density and strength, and its resistance to chemicals and alkalis.

PVC pipe with a schedule (SCH) rating such as SCH 40 or SCH 80 is most common in plumbing and irrigation use. The larger the SCH number the stronger the pipe. While SCH 40; SCH 80; and SCH 120 are the same outside dimension for compatibility of fittings, the wall is thicker on SCH 80 & SCH 120 pipe. SCH 40 pipe is commonly used in pressure applications such as mainlines (pipes that are under constant pressure, located before the sprinkler zone valves) for sprinkler irrigation systems. SCH 40 pipe has relatively high PSI ratings. SCH 40 PVC pipe should never be threaded, just add an adapter fitting when threads are needed. Thicker walled SCH 80 is very common in threaded pipe nipples as the thicker wall allows for threads to be cut or molded into it. 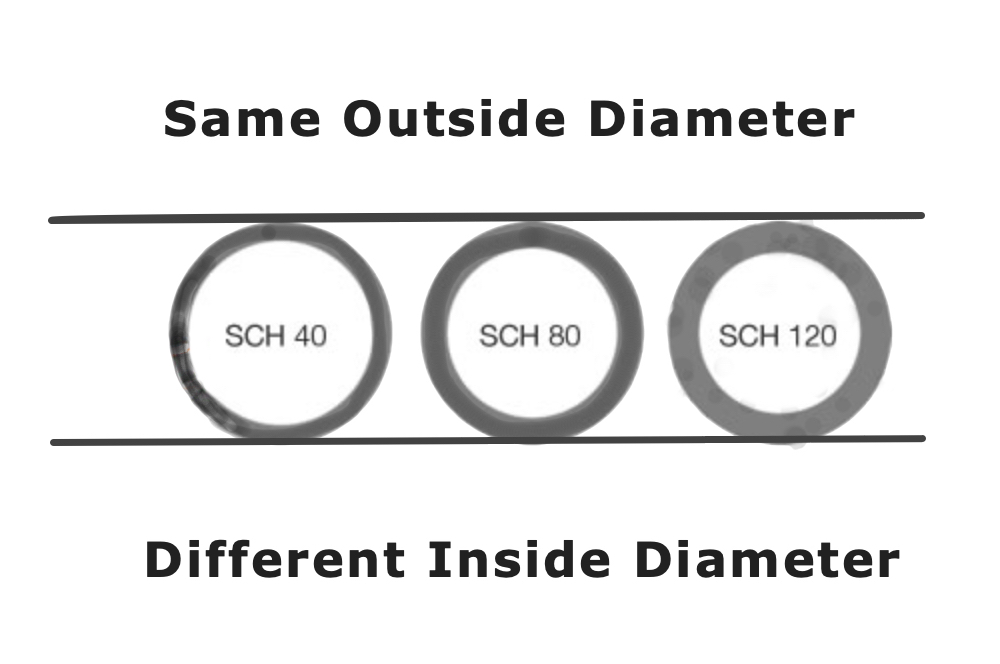 While the maximum operating temperature may be listed as 140°F, the service temperature rating is between 41° - 122°F continuous, and short or intermittent up to 140°F. The higher the temperature, the lower the pressure rating. See the chart for the de-rating factors at temperatures higher than 73°F.

To calculate this, take the working pressure of your PVC pipe SCH/class and size at 73° F and multiply by the de-rating factor nearest the operating temperature to get the maximum working pressure in your application.

Matching Your PVC Pipe and Fittings

Once you confirm your PVC pipe size then selecting a fitting is easy, just match the nominal pipe size to the corresponding fitting size.

To recap, the most important thing to remember when working with PVC pipe and fittings is how the nominal size is noted. A 1" fitting will fit on a 1" pipe. This is true for both schedule 40 or 80. So, while a 1" socket fitting has an opening wider than 1" across, it will fit on a 1" pipe because the outside diameter of that pipe is also greater than 1".

Schedule 40 PVC pipe does not have threaded ends so a slip fitting is needed to join sections of pipe together. Slip fittings will slip right on the PVC pipe and may seem tight, but will not hold water. The connection must be sealed. For a leak-proof seal on a slip fitting, you will need both PVC primer and PVC cement. The primer softens the inside of the fitting, preparing it to bond, while the cement bonds the two pieces together tight.

As an easy alternative to the hassle of primer and cement, HydroRain offers PVC-Lock fittings that are a simple push-fit style that do not require gluing for a leak-proof seal. Another advantage of PVCL is the fittings are removable and reusable. A size specific special release tool is required for removal. Here is a link to our selection of PVC-Lock Fittings.

Another alternative, to creating connections that can be taken apart, is PVC threaded fittings. Keep in mind that threaded fittings are a weak point in any piping system and the working pressure is reduced by 50% when a threaded connection is used. Proper technique is required for a secure leakproof connection. Many manufacturers have differing recommendations for using any chemical aid when joining plastic threaded components. Chemicals, such as teflon and pipe dope can degrade the plastic and increase risk of premature failure. We suggest following manufacturers recommendations. The leak-proof seal of a male and female threaded PVC connection can be made using a thread sealant compatible with the material. The sealant is applied around the male (outside) threads, then the two (male and female fittings) are screwed together, finger tight, then one to two more turns at most. Over tightening can cause stress cracks that will fail!

Here is a list of some of the common terminology used in describing PVC fittings.

Slip refers to a fitting with no threads that slips over the pipe and requires primer and glue (solvent and cement) to create a leak proof seal.

Socket (SOC) is the equivalent of a female end and slips over the PVC pipe of same size.

Spigot (SPG) is the equivalent of a male end and fits into a socket end of the named size. PVC pipe has spigot ends and requires socket fittings to join.

FPT or FIPT refers to a female pipe threaded connection. This means the threads are on the inside of the fitting. Connection is to a male pipe thread fitting.

Coupler, Coupling, or Union is a simple straight fitting used to join or “couple” two parts together. Couplers can be slip or female threads or a combination of the two, joining pipe to pipe, pipe to fitting or fitting to fitting. The union coupler has threaded tightening rings or collars on one or both ends for easy installation or removal of the connected parts.

Tee is just what it sounds like, a “T” shaped fitting to connect parts in three different directions with two being a straight line and one creating an angle (usually 90 degree). Tee fittings can have slip or threaded connections.

Elbow is used to make a turn in your line, most often found in 90 and 45 degree angles. Others may be available but much less common. Available in slip or threaded connections.

Cross is also just like it sounds. It is used to join four pipes at four 90 degree angles. Usually found with slip connections.

Adapter is a fitting with different connection types. Used to adapt from one type of part to another. Slip to a threaded connection or pipe thread to hose thread.

Bushing is similar to an adapter, but is mainly used to join pipes of two different sizes together. Usually threaded or spigot.

Cap or End Cap closes the end of your pipe. A cap is a socket or female fitting.

Plug has the same purpose as the cap but it is a spigot or male fitting. Most common with threads for plugging or closing a fitting.

Nipple or Pipe Nipple is often labeled as TBE (threads both ends) or TOE (threads one end). A pipe nipple with both male threaded ends is often used as riser in a lawn irrigation system, to connect the sprinkler to the underground piping.