Drip irrigation equipment has many applications outside of growing crops; climate control for people and animals, water features and even mining operations. Drip irrigation is largely regarded as best practice in heap leach mining as it solves a lot of the environmental problems encountered by leach mining with impact sprinklers. Drip irrigation is also regarded as more efficient than using impact sprinklers for this application, as there is less evaporation and less water is required.

In addition to fewer environmental impacts and more efficient use of water, drip irrigation hydrometallurgy helps achieve greater volumes of extracted ore. This is due to drip irrigation’s superior uniformity of application. In this type of leach mining, using pressure compensating emitters can greatly improve uniform distribution. Pressure compensating emitters can compensate for higher pressures caused by gravity when operating on slopes, allowing those at the bottom of the slope, and thus under greater pressure, to drip at the same rate as those at the top. In addition to this, drip irrigation applies water directly to the heap rather than spraying from above.  This greatly reduces the influence of wind and evaporation on the solution.

The method is fairly straightforward. Driplines with evenly spaced emitters (typically 24” in mining) are run across the heap. As the solution goes through the dripline, it is released from the inline emitters at an even rate. Through gravity and the capillary action of the heap, the solution spreads evenly throughout the heap where it collects at the bottom in the pregnant solution.

At its most basic, a heap leach mining operation that uses drip irrigation looks like the illustration below. 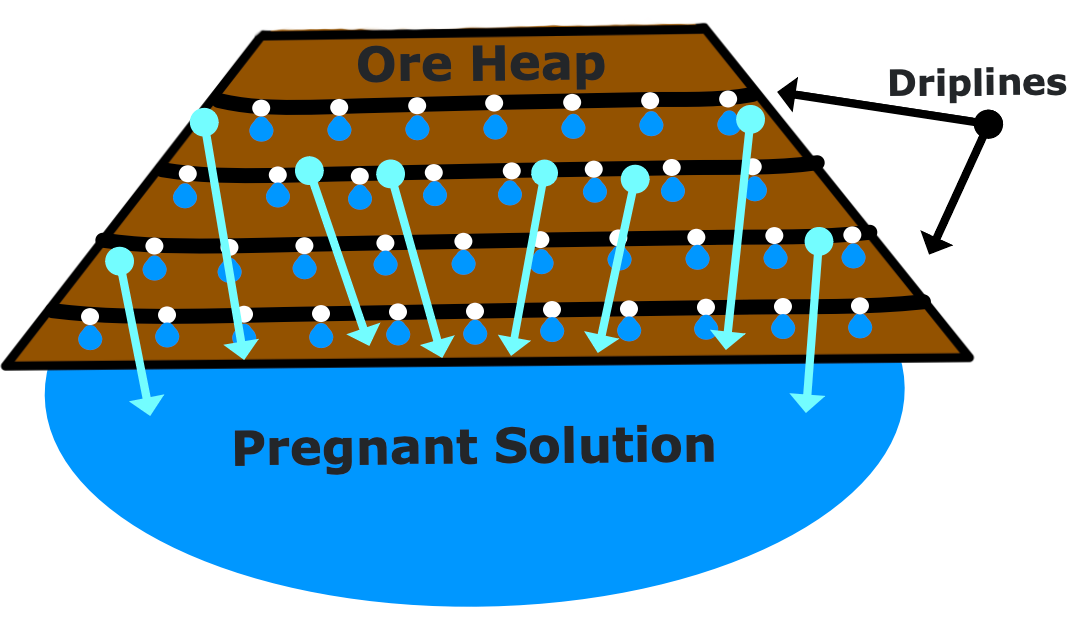 This factor is important in mining as it is in irrigation for the same reason: coverage. If an ore heap has poor capillary action, the solution isn’t likely to spread far enough, leaving much of the ore unmined. Even if a heap has good capillary action, using a dripline with too wide of spacing could still result in dry spots where no solution can reach. Oversaturation is, however, just as detrimental to the operation as under-application. The chemicals require oxygen in order to create the necessary reaction and an oversaturated heap may not have sufficient oxygen for these reactions. Note that when properly used, most of this action will occur beneath the surface; dry spots on the surface of the heap do not indicate lack of coverage. 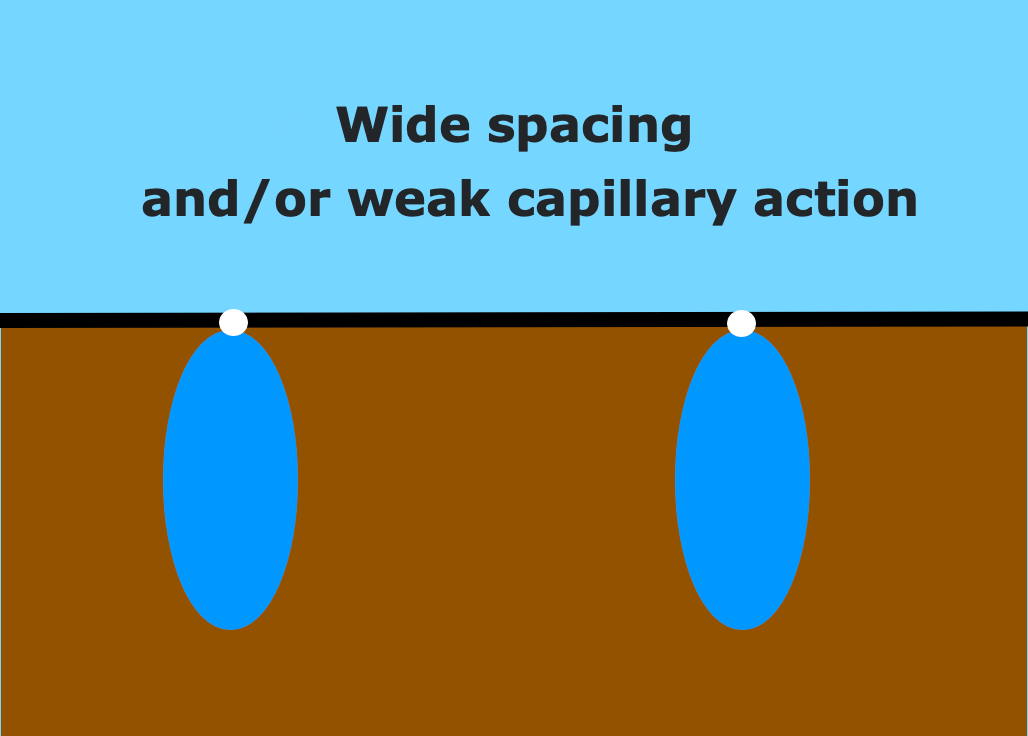 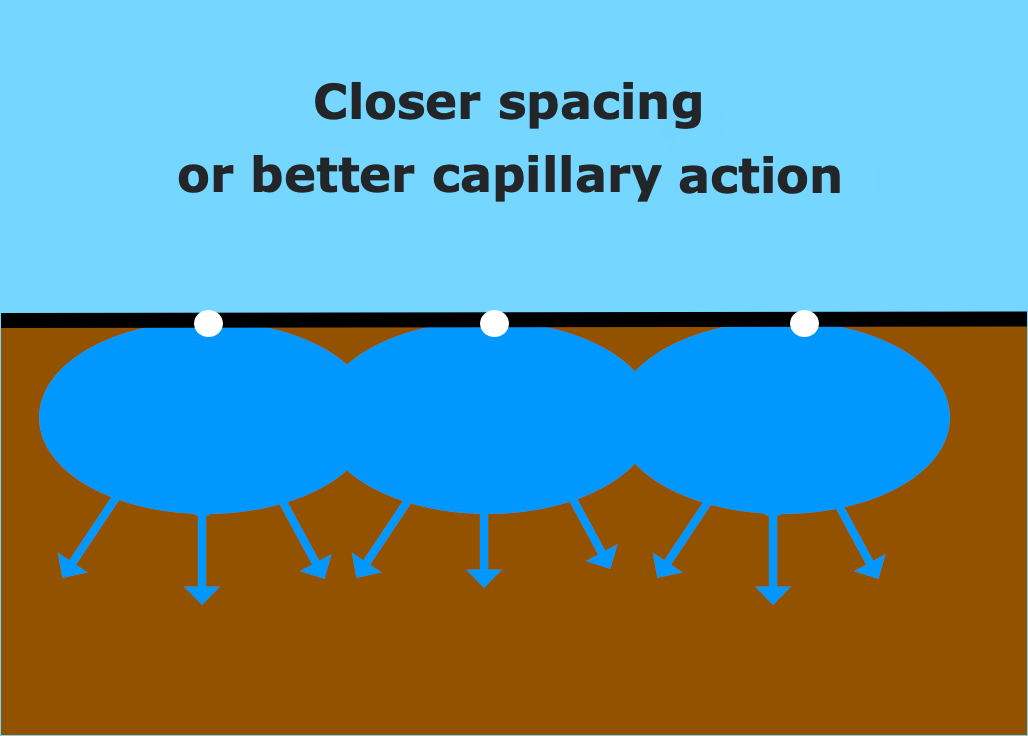 Complete coverage without oversaturation is the goal when considering emitter spacing and capillary action. Capillary action can be tested in a number of ways. The easiest way is to use a drip emitter or a run of dripline and run the system for an hour. After operation, you can check beneath the surface to see how far the water spread from the point of drip. Keep in mind the wet spot on the surface should be significantly smaller than the actual wetted area sub-surface.

While driplines are the most frequently used drip emitters in mining, microsprinklers are a popular alternative, particularly Senninger Wobblers.  Wobblers solve one of the major problems that traditional microsprinklers encountered in mining applications, most notably the fine water particles that are susceptible to wind drift and thus evaporation.

Wobbler technology solves this by creating larger/heavier droplets, particularly when compared to impact sprinklers. Senninger describes the droplets as “rain-like.” These larger droplets are heavier and less prone to wind drift and misting. They operate at the same low pressures as other drip emitters providing the same great efficiency and effectiveness.

One advantage wobblers have is in fewer chances for clogged emitters. Wobblers can be spaced apart 20’ to 23’, greatly reducing the quantity of emitters used and thus opportunities to clog. The method is very similar to using dripline. You simply elevate the wobblers above the heap, on risers or riser adapters, so that full coverage is achieved when they are operated.  The solution is then dispersed across the heap by the wobblers and the same capillary action carries the solution throughout.

At its most basic, a mining wobbler setup would look like this: 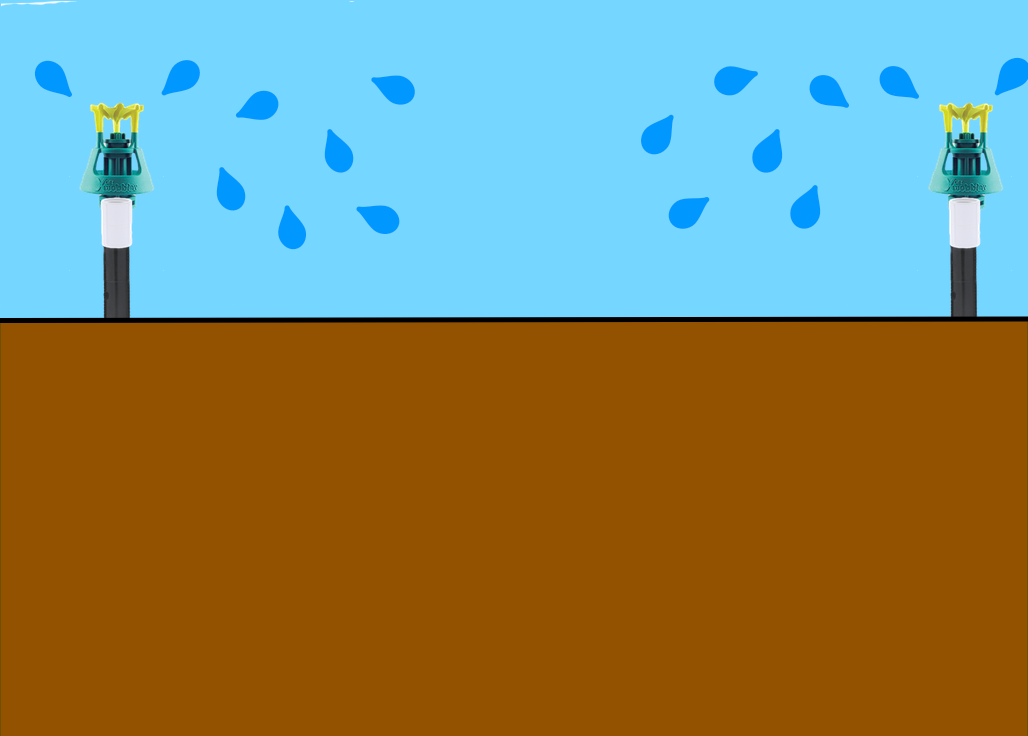 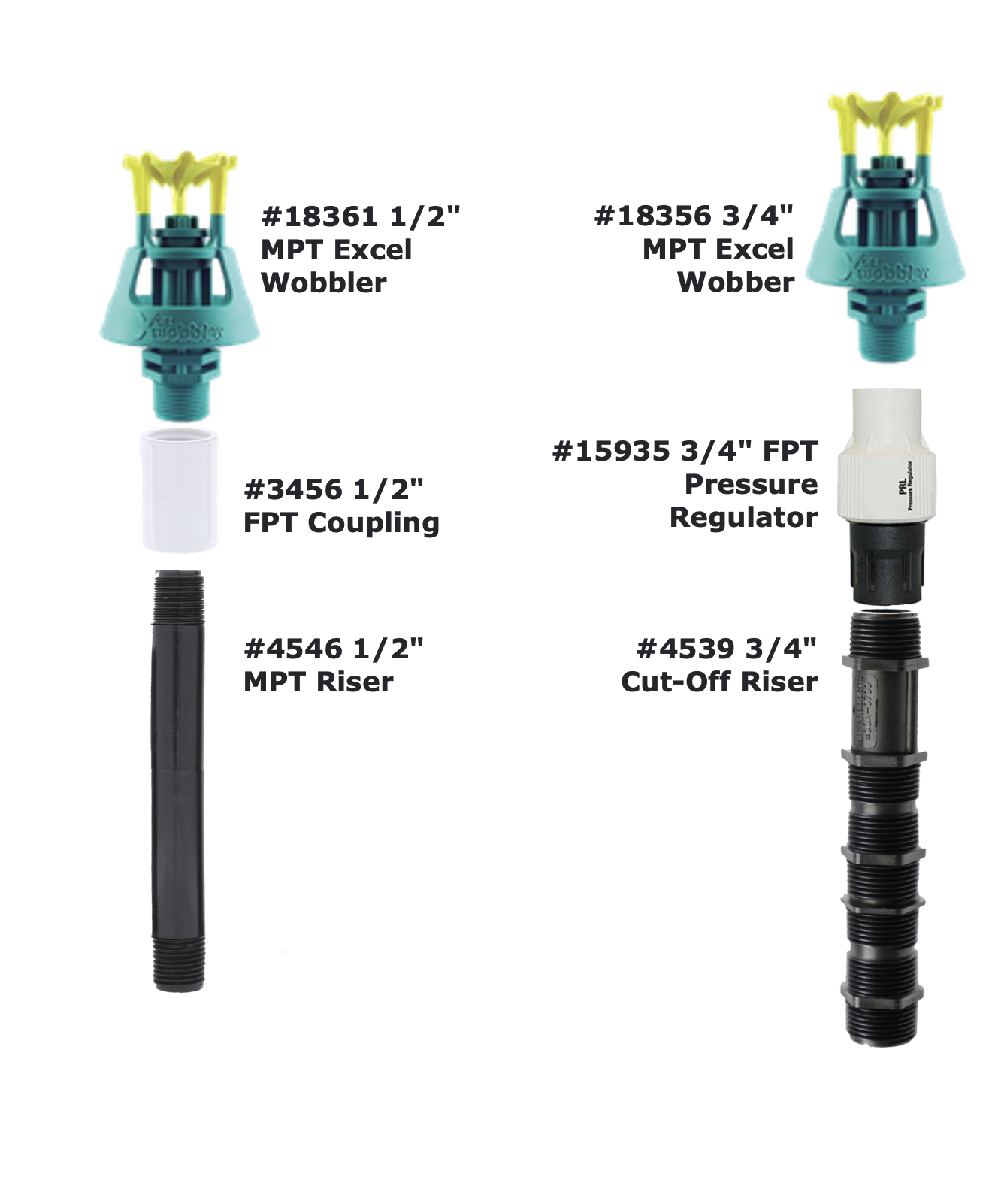