Sub-Surface Turf Irrigation, Lawns in the Age of Drought Print

With severe drought conditions affecting many parts of the country, lawn irrigation has come under great scrutiny due to the amount of water used to keep lawns green and growing. Watering restrictions specific to lawns have been enacted in many municipalities; this is a trend that is likely to continue. With drought conditions unlikely to abate any time soon, we have seen a rise in those seeking alternative irrigation solutions for their lawns and landscapes. 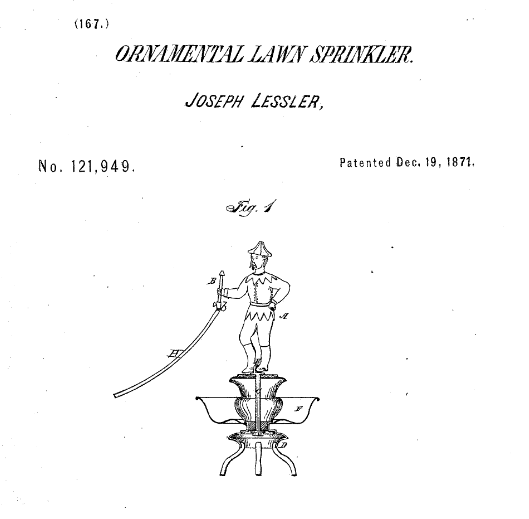 It has been said that necessity is the mother of invention, a statement that certainly holds true in the world of lawn irrigation. From the first patent in 1871 for a “Lawn Sprinkler”, to the invention of the impact sprinkler in the 1930s, to the iconic Hunter PGP rotor in 1981 and their highly efficient MP Rotator in 2007, lawn irrigation has continued to evolve in efficiency as demands on water have increased exponentially in the 21st century. 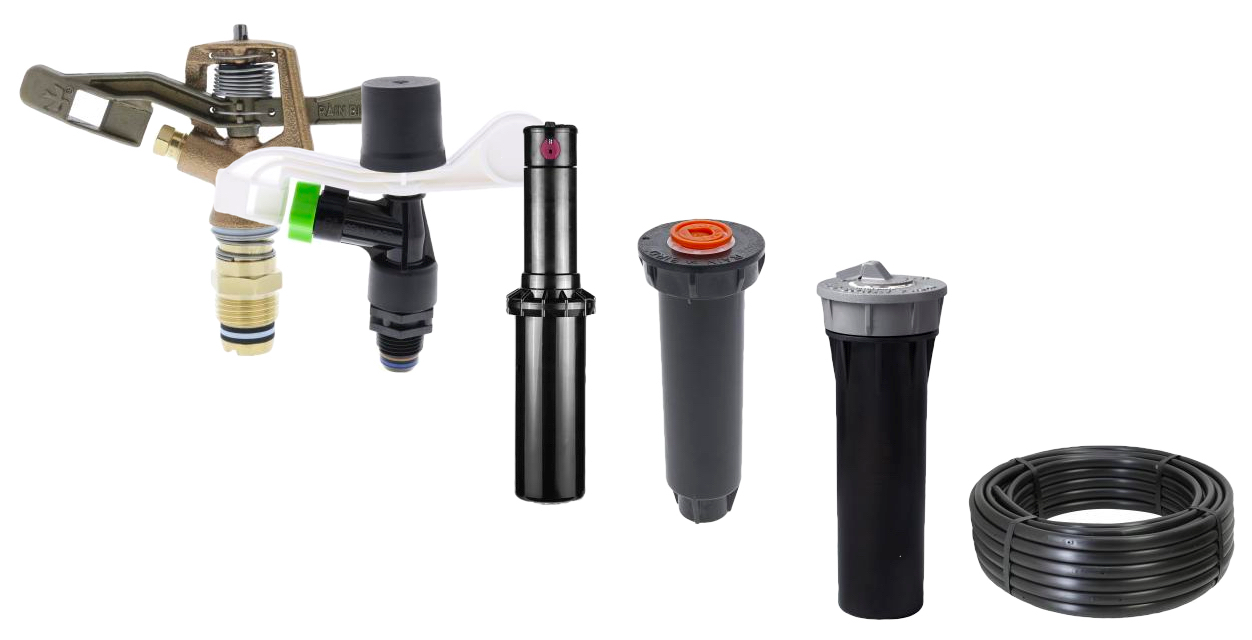 This evolution has culminated with the use of sub-surface lawn irrigation. Sub-surface lawn irrigation is essentially drip irrigation applied to turf and lawn. The same hyper-efficient drip technology that has been widely adopted by farmers and growers the world wide for the crops that are the lifeblood of their labor has been discovered to be just as effective and efficient when used in lawn applications.

Imagine practically no wasted water, a lawn system with near peak efficiency. Sub-surface irrigation enjoys no evaporation as it will never be exposed to the sun, the heat of the day, or the open atmosphere. When used correctly, there is no run-off. Sub-surface lawn irrigation is the single most efficient method of lawn irrigation on the market today. It is estimated to use 20% to 40% less than other methods.

Sub-surface lawn irrigation is accomplished by laying down rows of emitter line beneath the turf to be irrigated. This can be done with simple parallel lines, or in cases of sandier/looser soil, as a grid or checkerboard pattern. The emitters in the line then drip directly into the soil. The effect of this is a green and healthy lawn with significantly less water used and virtually none lost to the environment.

The emitter line is typically buried between 4” - 6” for lawn and turf, and 4” to 14” for other applications such as smaller plantings and shrubs. The capillary action of the soil will see the water spread evenly throughout the root system. The roots will, in turn, be drawn to the water. This type of direct watering contributes to a strong established root system and healthy turf. 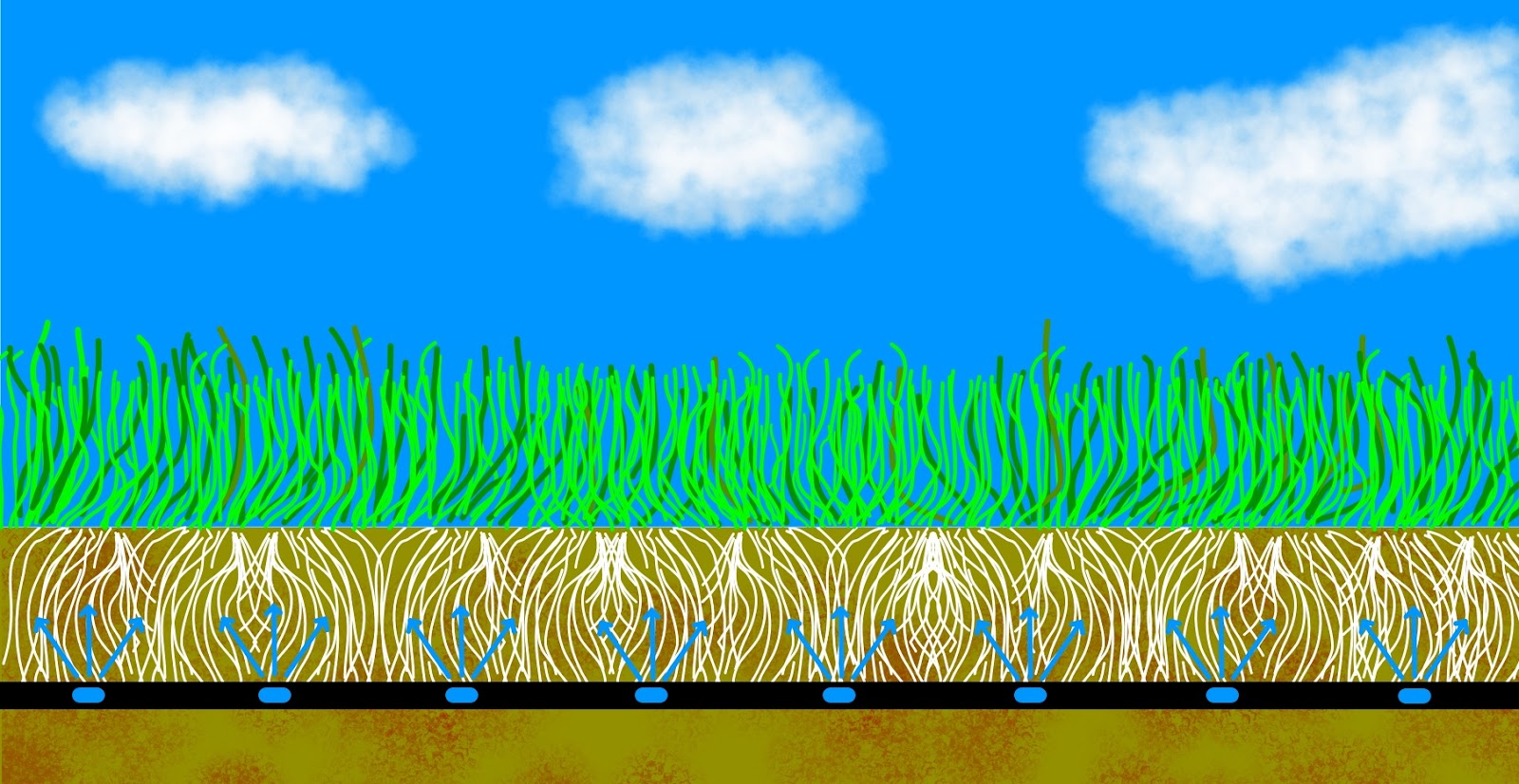 The type of emitter line used can vary, but in most cases, Pressure Compensating Poly Drip Line with CNL will serve the best for several reasons. While drip tape is often used in sub-surface applications, it's very thin walls are more likely to experience damage over time. Normally not a problem when it’s under some mulch next to a row of crops, but it’s a different case when under turf you do not want to disturb.

The main benefit of pressure compensating emitters is that they provide good distribution uniformity despite elevation changes within an irrigation system. In sub-surface applications, however, they provide other advantages as well.

Even if there are no elevation changes, pressure compensating emitters provide greater uniformity. This is because pressure compensating emitters have a minimum PSI threshold that must be reached before they open and begin dripping. This means all the emitters in the line start dripping approximately at the same time, as the minimum PSI will not be met until the lines are full and pressurized. This prevents the turf at the start of the run from receiving more water than the turf at the end. This, along with the CNL feature, helps prevent emitters from draining after shut-down. 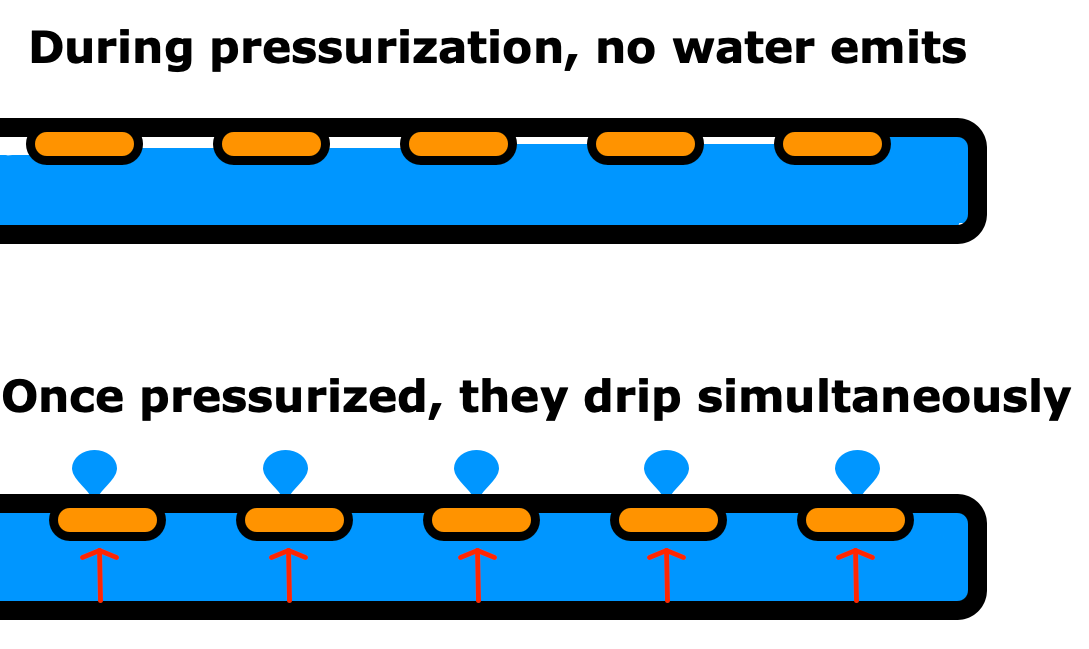 Pressure compensating drip line is also less likely to become clogged than fixed, non-pressure compensating emitters. Because the emitters do not open until the minimum PSI is reached, they remain closed after system shut down which greatly reduces the risk of back-siphonage pulling debris in through the outlet of the emitter.

Drip line with the additional anti-siphon feature also greatly aids in preventing this type of back-siphonage. Pressure compensating drip-line that also has the CNL (check non-leak) feature has an additional layer of protection in preventing emitters from draining after shut-down. When water drains from low-point emitters, air can be pulled in through other emitters on the line; though this can be prevented with anti-siphon features, if air is unable to enter there is the risk of cavitation. 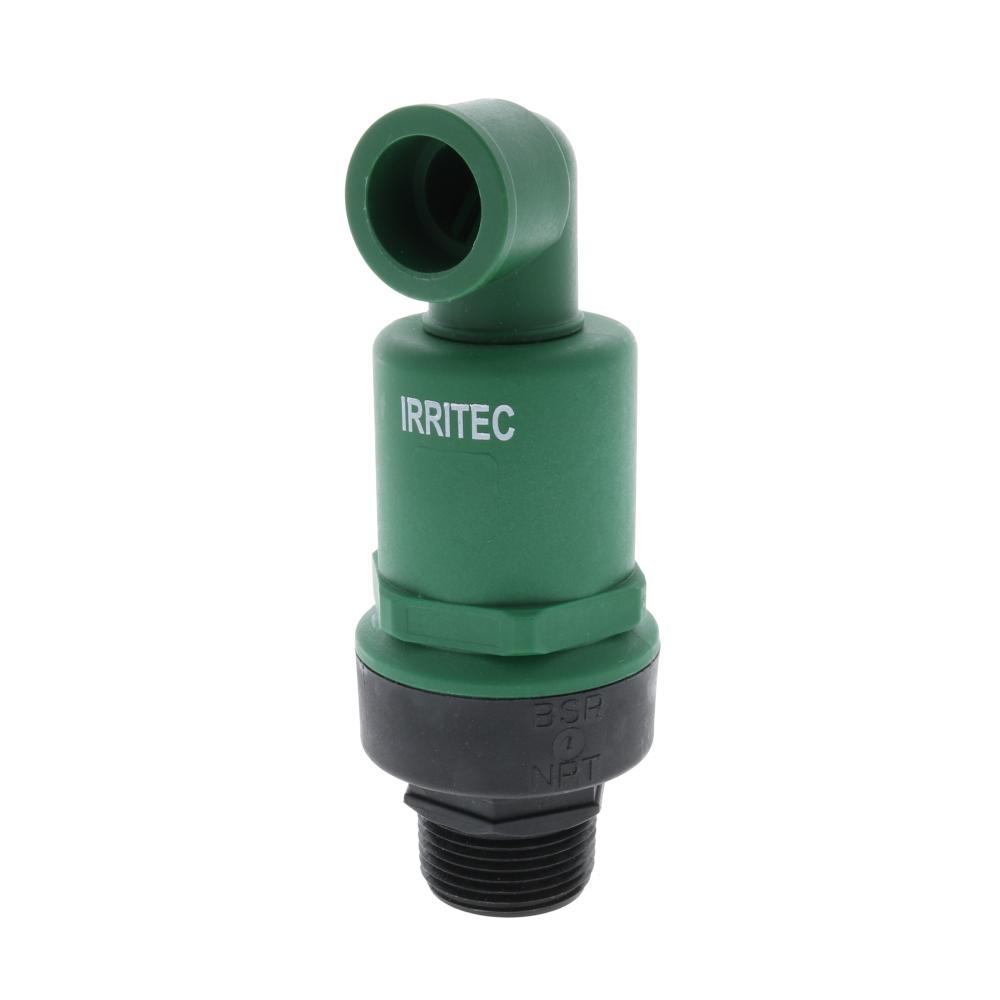 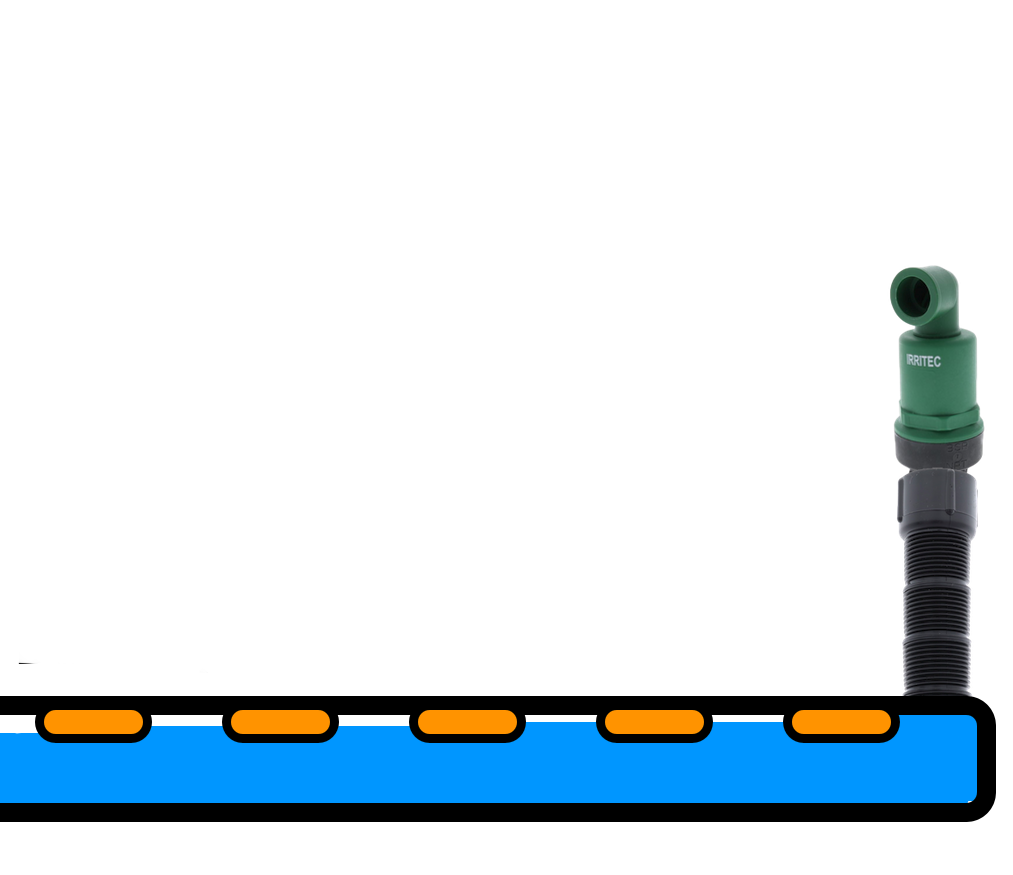 The addition of an air vent / vacuum relief valve will go even further in protecting the system. Air vents allow air to escape at system start-up which will prevent air pockets and some water hammer. The vents also allow air to enter the system at shut-down, which further helps prevent back-siphonage from occurring at the emitter level and also helps prevent cavitation of the drip line. 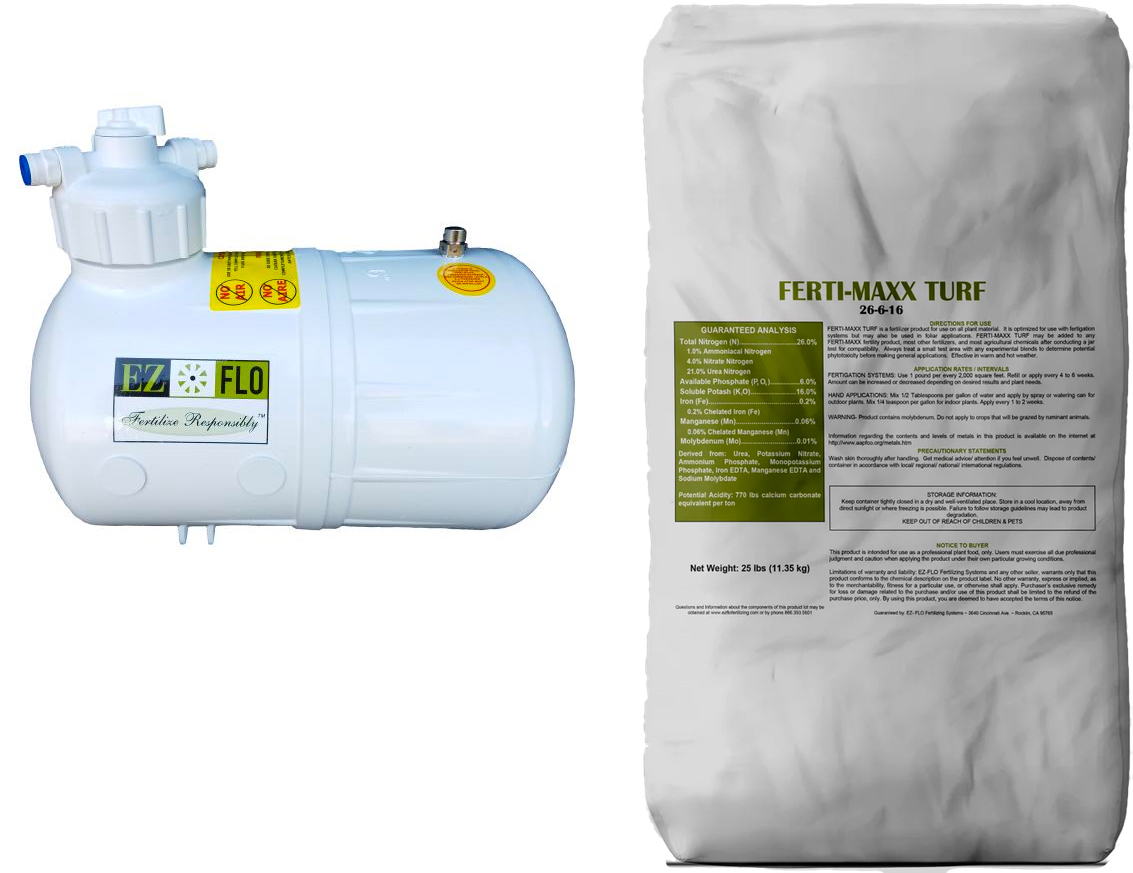 Perhaps one of the greatest advantages to sub-surface lawn irrigation is the ability to apply fertilizers beneath the lawn’s surface with the use of a fertilizer injector. In addition to helping with a healthy, green lawn, it’s also safer for people, pets and wildlife. No longer does the fertilizer need to be applied to the surface where people can come into contact with it. It is both safer and more efficient, providing all of the benefits of surface application with nearly none of the detriments.

EZ-Flo injectors are popular in lawn irrigation applications due to their ease of installation and use. They work on the Venturi effect, meaning it’s almost harder for them not to work than to perform as they should due to using pressure differential physics instead of moving parts. If the mainline they are installed on is ¾” to 1”, no additional parts are needed. If the mainline is larger than 1”, all that is needed is the correct sized EZ-Flo Ball Valve Coupling. 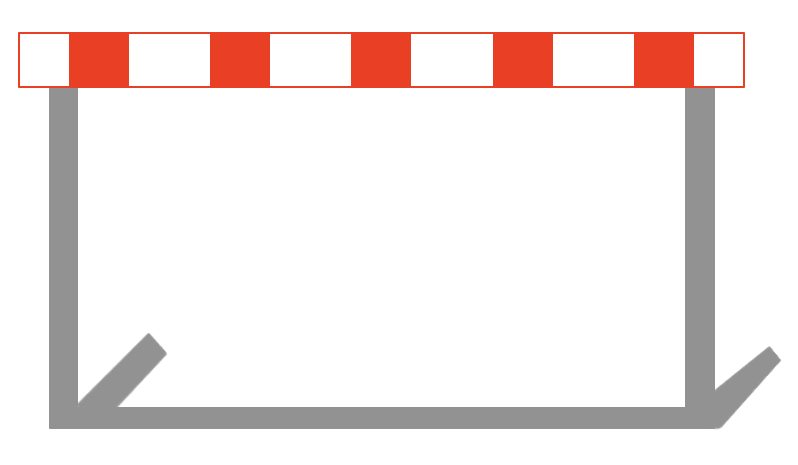 There are still some challenges to be surmounted in sub-surface lawn irrigation. Chief among these are clogs: designs have greatly diminished the chances for clogs in sub-surface applications, but over time a clogged emitter or so is almost inevitable. Clogged emitters are very easy to fix, however it does require access to the line; not a problem when adjacent to a row of crops, but can be problematic on a lawn or turf.

Another obstacle is the initial installation. If the lawn is already present, it must be trenched to some degree to lay the lines, which will, at least temporarily, affect its aesthetics. At the moment, the primary installation time is prior to laying down the sod or prior to seeding, though it is not entirely uncommon to see it installed on established turf, but it will require time to repair.

Thank you for reading. If you have any questions, comments or feedback, please Contact Us. We read and reply to every message we receive and would love to assist with your questions and learn from your feedback.